The school nurse called this week. Our second grader fell and hit her mouth on a desk. She’s fine. It was no big deal. She didn’t need to come home. The nurse just wanted us to know. Well… she wanted one of us to know and that one was mom.

I was out of town on a business trip and I got a message from my wife, “On phone. Missed a 727 number. Let me know if they call you.” Terri works from home and was on a work call, one that she couldn’t easily end to get the call that looked like it was coming from school. I replied, “OK. None yet.” A few minutes later, Terri says, “Got the voicemail. She tripped and fell.” That was it. The school nurse called Terri and left her a voicemail. The nurse never called me.

This is not OK and it turns out it happens a lot. We talked with Sarah Clark about this type of thing on a podcast episode earlier this year. Sarah is a researcher with the C.S. Mott Children’s Hospital at the University of Michigan. In our Daddy Shaming episode she shared that more than a quarter of dads say they feel excluded by schools and health care providers.  “Mom gets the call and is put on the email list,” she says in the podcast episode. “Schools shouldn’t fall in that trap. It’s OK to call dad.” It’s more than OK. It should be the standard.

This issue is even worse for divorced dads. It’s common for schools to flat out ignore them. Dr. Jessica Troilo from West Virginia University did the research. She says schools often don’t update divorced dads, or dads who don’t live with their kids, about how their children are doing in school. She said many dads don’t find out about events at school until the last minute – making it tough to attend.

Author KJ Dell’Antoia (who is booked to be on an upcoming Positively Dad podcast) got some attention when she posted this on her Instagram: 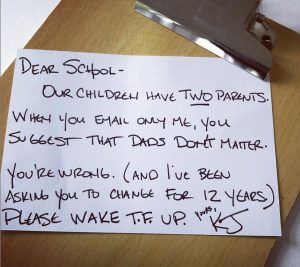 She’s right. That’s exactly the message school sends. Dads aren’t equal. Dads don’t know. Dads don’t matter. Naomi’s school, and many others can do better and should do better. It’s the second time we’ve had something like this happen. The other was at registration when the they didn’t ask for my contact information to add to Naomi’s record in the database. The database they use to update parents on what’s happening at school. I had to ask to be added and she said, “Oh, most dads say just email mom.” Do most dads say that or is the school simply not asking. And if most dads say that, well dads, you can do better too.

Sarah Clark told me schools should be more purposeful in including dad. She said, “Challenge them to make sure they aren’t sending inadvertent negative messages. We want to involve dads as much as possible.” In fact, schools are almost begging for dad to come in. We posted on how you can get involved in school in a blog last month.

I did exactly what Sarah said… challenge them. I talked with the school nurse and she said she left a message and didn’t call me so we wouldn’t be alarmed. Hmmm… I guess that makes sense. I asked that she would call me if she can’t reach Terri. She said, “I’ll note that on your file that you’d like to be called.” Ummm, no. “Could you make it your policy to always call dad if you can’t reach mom,” I asked. “Sure,” she said and hung up.

Chances are this is an issue in schools across America and it time for it to end. Dads… challenge the school when they don’t keep you in the loop and do more to stay engaged. School leaders… drop the traditional gender roles and get with it. Dads are parents too.

About the author, James

Thank you for joining me for the Positively Dad journey! My name is James Shaw and I'm a husband and father. I live in the Tampa Bay area with my wife, Terri and our young daughter, Naomi. The goal with Positively Dad for us to think, learn and grow. It's easy to get caught up in the day to day and miss opportunities to become amazing fathers. I trust that the conversations we have on Positively Dad will help you see that fatherhood is truly a journey and that we are better together than figuring it all out on our own.

← 4 Ways Halloween Brings Out the Best in DadsTeens, Tech & Food – The Connection Between Your Phone and Your Health →

What should we talk about on Positively Dad?

We’re always looking for great topics, experts and people to interview on Positively Dad. Who do you know that we should have on the podcast? What topics would you like us to discuss? Let us know at james@positivelydad.com.